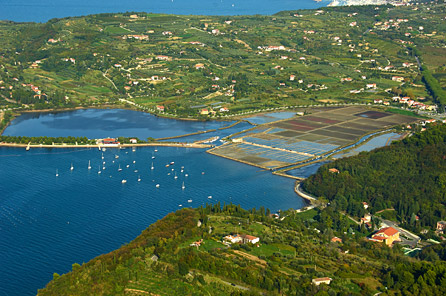 The Strunjan Landscape Park is a unique, preserved piece of nature in the Gulf of Trieste, which is revealed through images which have been for millennia created by the sea. They can be seen in the natural and cultural heritage, which were given life by the sea and meaning by the locals.

Like all Slovenian regional parks, the Strunjan Park is a cultural landscape, which is unique due to its location by the sea. The Strunjan Peninsula is typically settled by houses, scattered over large areas of arable land, and the settlement of the typical Istrian type has never been developed. The favourable maritime climate and flysch ground have created the conditions which have been successfully used by the locals, who have created terraces for growing early cultural plants.

The natural resources of the seashore were perfect so that the inhabitants could construct salt pans with accumulations, channels and shallow pools in this part of the Strunjan Bay. In the period of the Republic of Venice, the extremely clear and white salt was important merchandise, and it is still produced in the traditional way today. The sea by the salt pans did not only create salt, but also a home to rare plants and animals, which are adapted to the very salty soil.

Stjuža, the only Slovenian sea lagoon, is a special feature of the Park. Another attraction is the Cliff of Strunjan which is the highest cliff in the Adriatic, formed out of precipitous flysch rock. This is also the only part of untouched nature along the 130 km long coastline of the Trieste Gulf between Grado in Italy and Savudrija in Croatia. The steep cliff and the pebbled coast at its bottom are completely at the mercy of the sea, wind and rain that redesign the crumbling rock layers by carving out new shapes. 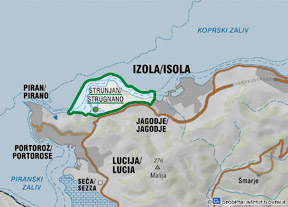