International importance:
In 1993 declared for area of Ramsar's Convention 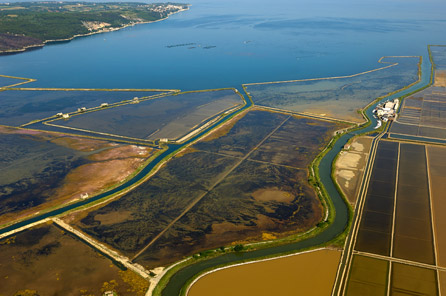 The Sečovlje Salt Pans are, besides the Strunjan Salt Pans, one of the last salt pans in the Mediterranean, where salt is obtained manually with a method which is several hundred years’ old. The traditional nature- and human-friendly method of salt production has through time enabled the development of special living environments in the salt pans and near them. In the Sečovlje Salt Pans nature and man go hand in hand.

Salt pans might have formed on the accumulations at the mouth of the River Dragonja as early as in the Roman Period, but definitely in the Middle Ages. Through time, the salt pans were co-created in a considerate way by man. Traces of medieval salt panning can be found in the ruins of the former houses of the salt pan workers in the southern part of the park, which is called Fontanigge. The collection of salt stopped in the middle 1960s. On the Lera in the north of the salt pans, salt production never stopped; the work of salt pan workers is a living masterpiece, which has maintained and only slightly updated the medieval patterns and methods.

The large and shallow water areas in the embrace of the sub-Mediterranean climate have always been full of life. Not only of the salt pan workers, but also of animals and plants, thriving in the salty environment – plants called halophytes. In autumn, many of them typically colour red, when they extract all the nitrogen from the soil, which is poor in nutrients.

Out of the animal species, the saline habitat is a heaven for birds. Different biotopes have formed in the channels and pans and they represent an extraordinary habitat for bird species that find their night or shelter here. So far 296 species have been counted. The salt pans channels and tepids are distinguished by the South European toothcarp, while in summer visitors can notice the small, a little more than a centimetre large red coloured brine shrimp in the salty waters. 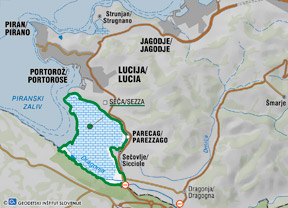