Importance:
404 natural values, among them 297 underground caves. The whole area of the park is of ecological importance (The central area of the large beasts’ habitat.) There are 9 Natura 2000 areas, 6 for habitats and 3 for birds. Natura 2000 area of Cerkniško jezero is declared for 33 bird species. 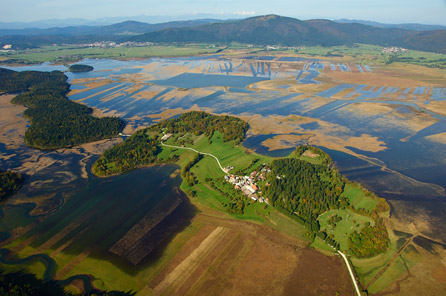 The Notranjska Regional Park was established by the municipality of Cerknica in 2002 with a view to preserve, protect and explore natural and cultural values, exceptional geomorphological, geological and hydrological characteristics, protect natural ecosystems and characteristics of an inanimate nature, as well as the archaeological and ethnological heritage.

The area of the Notranjska Regional Park is characterized by a unique combination of diverse landscape, the coexistence of man and nature and a large number of Karst phenomena on the surface and in the underworld. In the protected area there is a large number of rare and diverse habitats, flora and fauna, as well as geological and cultural heritage. The overhanging rocks in the Rakov Škocjan Valley are also where endemic Justin's Bellflower (Campanula justiniana) grows

Many years ago, Janez Vajkard Valvasor wrote: “The Carniolan name for the lake is Cerknica Lake and I think that there is no other lake in Europe or in the world quite as beautiful.” 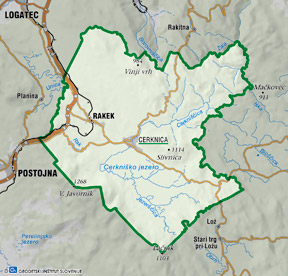